Pakistan has played an important role in defusing tensions between arch-foes Saudi Arabia and Iran, Prime Minister Imran Khan has told Al Jazeera in an exclusive interview, saying his country prevented a military escalation from taking place in the volatile region.

Khan said in the interview due to be broadcast on Wednesday that a military confrontation between the two regional powers constituted the worst possible scenario for the Middle East, adding that, despite the slow pace of results, Islamabad’s mediation efforts were continuing.

“Our mediation between Iran and Saudi Arabia has not stopped and we are making progress but slowly,” Khan told Al Jazeera.

“We have done our best to avoid a military confrontation between Iran and Saudi Arabia, and our efforts have succeeded”.

Tensions have been rising between Riyadh and Tehran over myriad issues, including the war in Yemen where the kingdom is battling the Houthi rebel movement.

“India fell under the control of an extremist ideology [propounded by] the “RSS,” Khan said, referring to the
Rashtriya Swayamsevak Sangh organisation, to which Modi belongs and which critics accuse of fomenting communal violence.

“What India’s Muslims are facing resembles what happened during the extermination of Jews in Nazi Germany,” he said.

The organisation, whose origin dates back to the early 20th century and whose thinking is widely believed to underpin the ruling Bharatiya Janata Party’s ideology, has long maintained that Hinduism is the basis of Indian nationalism.

Khan, who assumed office in August 2018, said his country has exhausted all possible routes to peacefully resolve its dispute with its western neighbour but that economic interests ultimately prevented its efforts from bearing fruit. 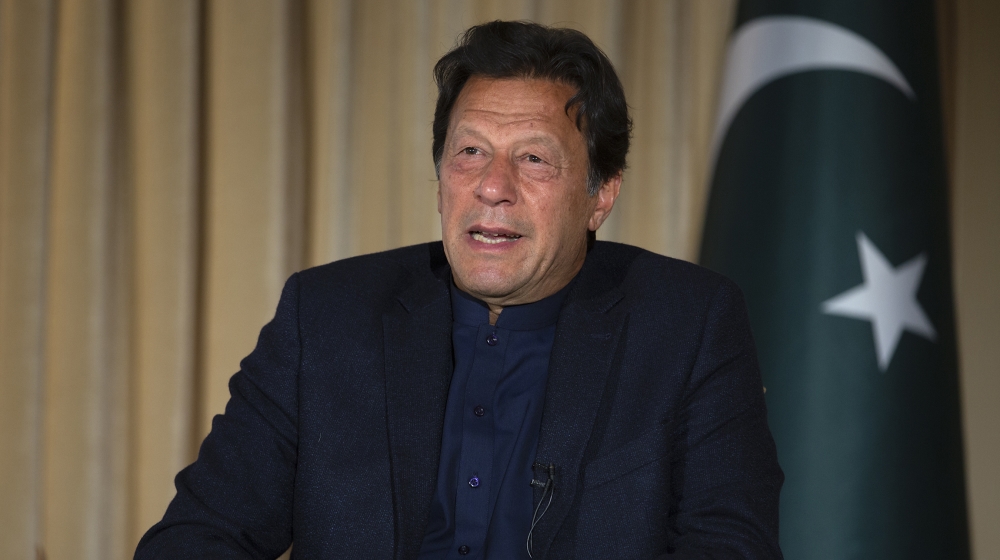 Khan also said Pakistan would maintain its neutral stance in the dispute between Saudi Arabia and Turkey [B.K. Bangash/AP Photo]

On the issue of Kashmir, Khan said the Indian government’s revocation of Article 370 in August 2019 turned the disputed region into an “open-air prison”.

Article 370 was the basis of Jammu and Kashmir’s accession to the Indian union at a time when erstwhile princely states had the choice to join either India or Pakistan after their independence from British rule in 1947.

The article, which came into effect in 1949, exempts Jammu and Kashmir state from the Indian constitution and allows the Indian-administered region jurisdiction to make its own laws in all matters except finance, defence, foreign affairs and communications.

“Within a year, Kashmir has been closed off and its economy destroyed,” Khan said. “Eight-hundred thousand Indian troops have imposed an open air-prison on Kashmiris.”

Khan also said Pakistan would maintain its neutral stance in the dispute between Saudi Arabia and Turkey, whose relationship has soured following the murder of Saudi journalist Jamal Khashoggi in the kingdom’s consulate in Istanbul in October 2018.

Asked about his absence from a Muslim summit held in Malaysia last year, Khan said he decided to not attend the meeting in order to preserve unity among Muslims, insisting that Islamabad viewed both Ankara and Riyadh – which boycotted the event – as reliable partners in several fields.