Hajj restricted: This is not the first time | Saudi Arabia News

Hajj restricted: This is not the first time | Saudi Arabia News

The coronavirus pandemic has forced drastic changes around the world, putting some two billion people under lockdown at one point.

Faith groups have also had to adjust to new realities, including Muslims who this year observed the holy month of Ramadan under much-subdued conditions, which saw the suspension of group prayers in mosques and large iftar feasts.

Similarly, the annual Hajj pilgrimage to Mecca, which started on Wednesday, will be a low-key event.

Saudi Arabia announced earlier this month that it would permit only about 10,000 pilgrims residing in the kingdom to perform the Hajj this year, with no overseas visitors allowed.

Usually, some 2.5 million pilgrims from around the world flock to Mecca and Medina for the week-long ritual that sees them performing their rites around the black-draped Kaaba and nearby holy sites.

In line with Islamic law

The Hajj is one of Islam’s five pillars – the basic tenets of Muslim life – that every able-bodied Muslim who can afford to is obliged to undertake at least once in a lifetime.

Saudi Arabia’s Ministry of Hajj and Umrah defended its Hajj decision along religious lines, saying in a statement it had been taken to “ensure Hajj is performed in a safe manner from a public health perspective” and was in line with the teachings of Islam “in preserving the lives of human beings”.

“Preventing the Hajj in one or more seasons can be done in accordance with Islamic law in situations such as the COVID-19 pandemic,” professor Muhammad Abdel Haleem, director of the Centre of Islamic Studies at the School of Oriental and African Studies in London, told Al Jazeera.

“The Quran tells Muslims – ‘Do not throw yourselves with your own hands into destruction’,” he added, quoting Surah al-Baqarah of the Muslim holy book.

Abdel Haleem also mentioned a Hadith – a saying attributed to the Prophet Muhammad – where he warned: “If there is plague in a town no one should leave it or go into it.”

Many who had paid for their Hajj this year – or intended to undertake the trip – have been disappointed by the cancellation, but Abdel Haleem said, according to some Islamic teachings, they would still reap spiritual benefits “for their intention, even if they cannot carry it out”.

“However, the obligation to do the Hajj remains, if and when it becomes possible for them to do it, so then they will be rewarded again,” he added.

This year’s Hajj will be not the first time the pilgrimage has been restricted, as previous disease outbreaks and political tensions also led to curbs on the ritual.

Here are a few examples of times when the Hajj was partially or fully halted:

Hajj was cancelled after the leader of the Qarmatian tribe, based in present-day Bahrain, attacked Mecca.

As many as 30,000 people, according to some accounts, were killed.

The Black Stone, a rock believed by Muslims to date back to the time of Adam and Eve and set into a corner of the Kaaba by the Prophet Muhammad, was looted and pieces of it stolen.

The group also desecrated the holy Well of Zamzam, which is close to the Kaaba, throwing in the bodies of murdered pilgrims.

After the attack, the Hajj was suspended until the Black Stone was finally returned to Mecca some 20 years later.

Devastating cholera outbreaks that struck several times throughout the 19th century resulted in the suspension of pilgrimages, including Hajj in 1837 and 1846.

After the disease returned in 1865 in Hejaz, a region of Saudi Arabia that includes Mecca, an international conference was called in Constantinople, modern-day Istanbul.

It was decided that quarantine ports would be set up in places such as Sinai and Hejaz to help limit the spread of the disease, as pilgrims set on their journey to perform Hajj.

Between 1830 and 1930, there were at least 27 cholera outbreaks among pilgrims in Mecca. 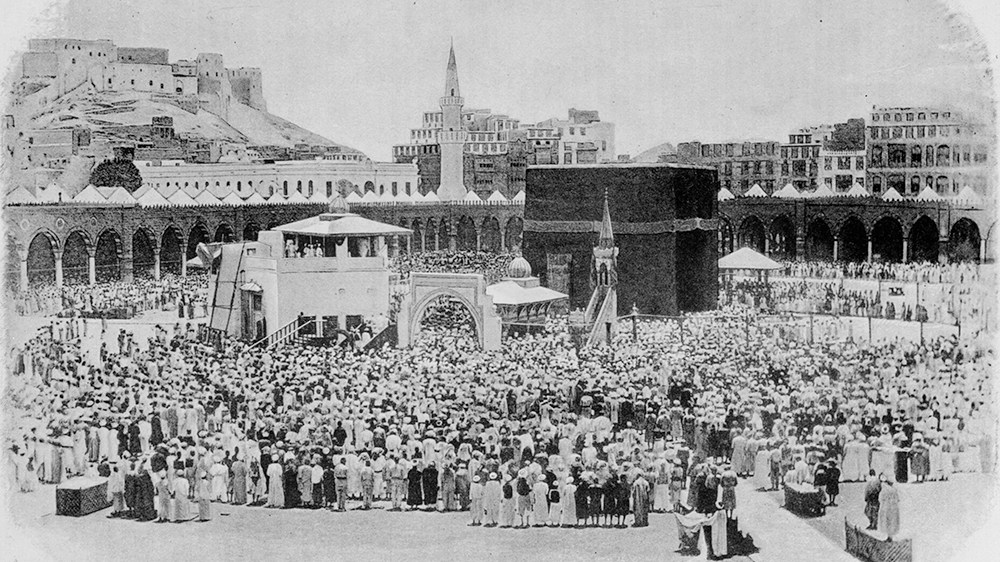 Crowds gather on a pilgrimage at the Kaaba, the birthplace of Prophet Muhammad, in Mecca in July 1889 [Hulton Archive/Getty Images]

A Saudi armed group of 400 to 500 men seized the Grand Mosque between November and December 1979, forcing the mosque’s closure for at least two weeks.

The takeover was led by a former Saudi soldier, Juhayman ibn Muhammad ibn Sayf al-Otaybi, who was critical of the kingdom’s ruling family, and called for a return to what he deemed the original Islam. 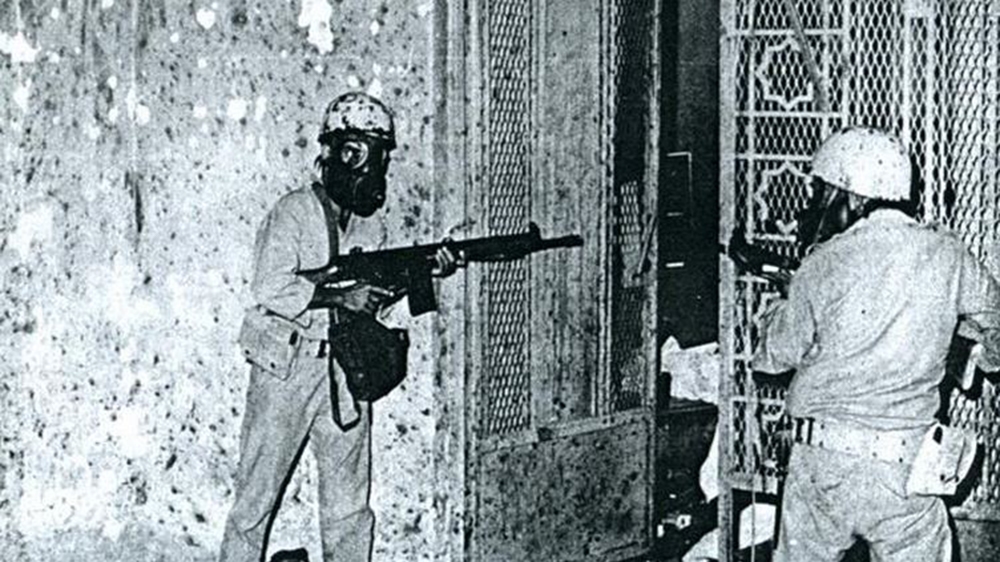 Saudi soldiers fighting their way into the Qaboo Underground beneath the Grand Mosque of Mecca in 1979 [File: Public Domain]

Iran boycotted the Hajj for three years between 1988 and 1990 after clashes between Iranian pilgrims and Saudi police during the annual ritual in 1987 left some 400 people dead.

On July 31, 1987, Iranian worshippers held large political demonstrations denouncing the policies of the United States and other nations. Saudi security forces responded by cracking down on the protesters, resulting in massive casualties.

Iran termed the episode a massacre. An estimated 275 Iranian pilgrims were killed during the incident.

In 2014, Saudi Arabia temporarily stopped issuing Umrah and Hajj visas for the citizens of Guinea, Liberia and Sierra Leone.

The three West African countries were hit the hardest by a major outbreak of Ebola in West Africa that killed more than 11,000 people before it was declared over in 2016. 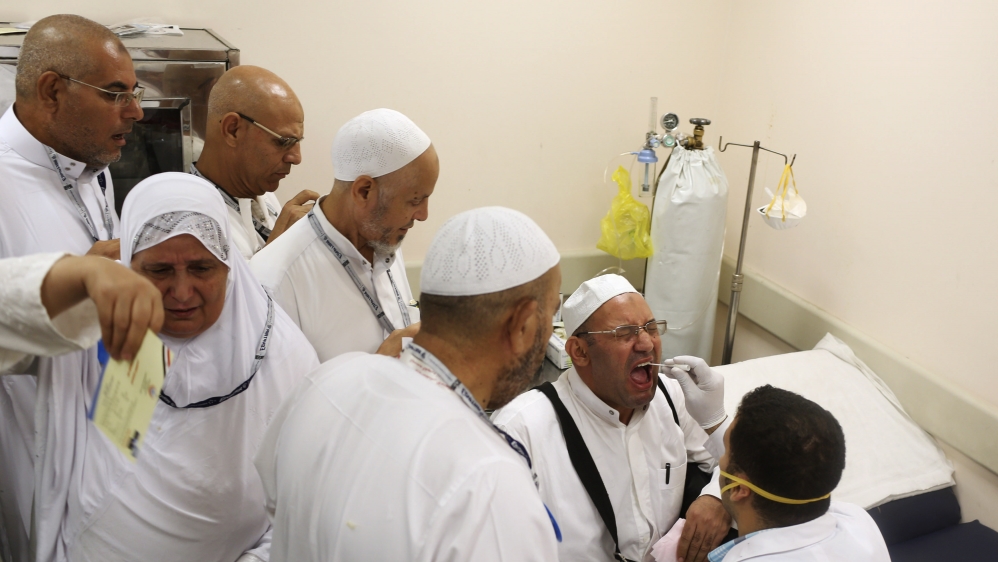 Egypt stepped up caution and security measures at its airports in 2014 to prevent an Ebola outbreak as pilgrims returned from Hajj [File: Asmaa Waguih/Reuters]

Iran decided against sending pilgrims to Hajj in 2016 after talks failed with Saudi Arabia to arrange for pilgrims to attend. Iran blamed its regional rival Saudi Arabia for “sabotage” and failing to guarantee the safety of pilgrims.

The decision came in light of a stampede during the 2015 Hajj when 700 worshippers, many from Iran, were killed.

Moreover, regional conflicts, such as wars in Syria and Yemen, created heightened animosity between the two countries that are believed to have contributed to Iran’s decision. 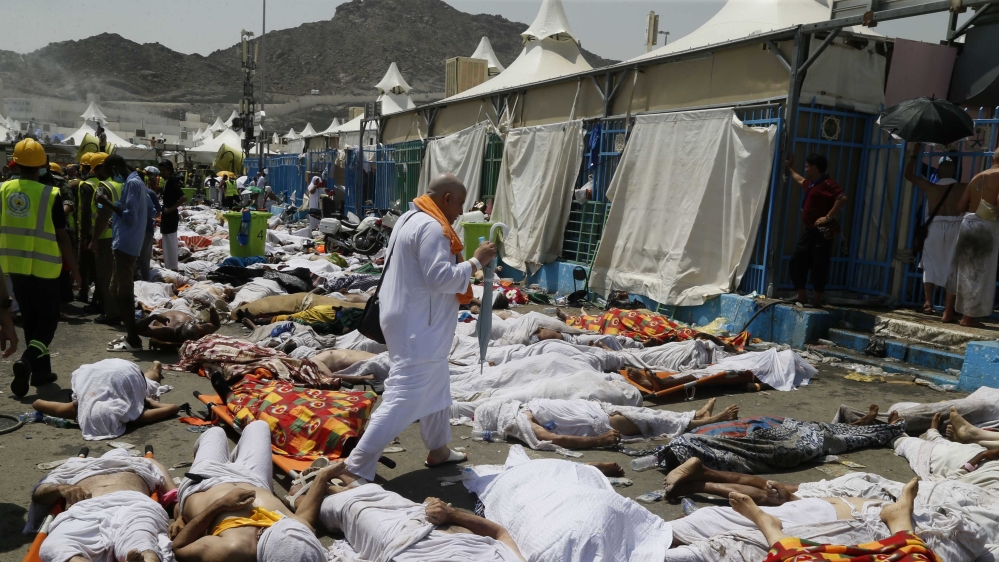 A Muslim pilgrim walks through the site where dead bodies are gathered after a stampede during the 2015 Hajj pilgrimage [File: AP]