By Chris Jewers For Mailonline

A Russian shopping centre has apologised today after it failed to recognise a picture of Adolf Hitler without his moustache, posting it on their ‘wall of fame’ of war heroes to celebrate Victory in Europe day.

The startling gaffe came from the ‘Cosmos’ shopping centre in the city of Chelyabinsk in the western Russian region of Chelyabinsk Oblast and was reportedly the result of a joke in poor taste.

The shopping centre created a ‘wall of fame’ for Russian war heroes for the 75th anniversary of Victory in Europe day and were posting images of the soldiers online as well as on big screens inside the shopping centre. 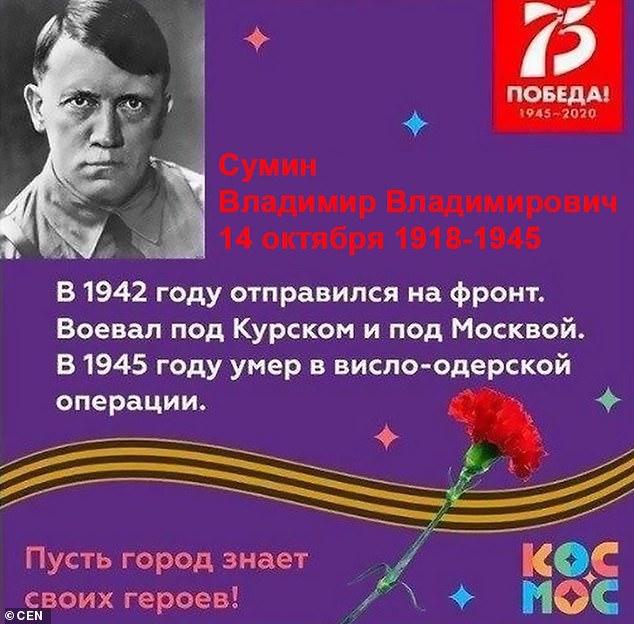 This picture was posted online by a shopping centre in the western Russian region of Chelyabinsk Oblast, when the moderator failed to see that the image was that of Adolf Hitler without his mustache. The text says it is paying tribute to Russian soldier Sumin Vladimir who died on the Eastern Front in 1945, but a trickster sent an image of Hitler as a prank

However, when paying tribute to Russian soldier Sumin Vladimir who died on the Eastern Front in 1945, the shopping centre unwittingly displayed a photo of Adolf Hitler.

The image that was sent by the prankster was put into a template with the shopping centre’s branding on, commemorating the 75th anniversary of VE day and paying tribute to Sumin Vladimir.

However, web users were quick to express their outrage and the shopping centre have now publicly apologised for the incident, and have clarified what happened.

The shopping centre’s head of advertising Ildar Yarulin, said: ‘We launched this project for the nation to get to know its heroes from WWII and called people to send their relatives’ photos with a short description of how they helped the army beat the Nazis 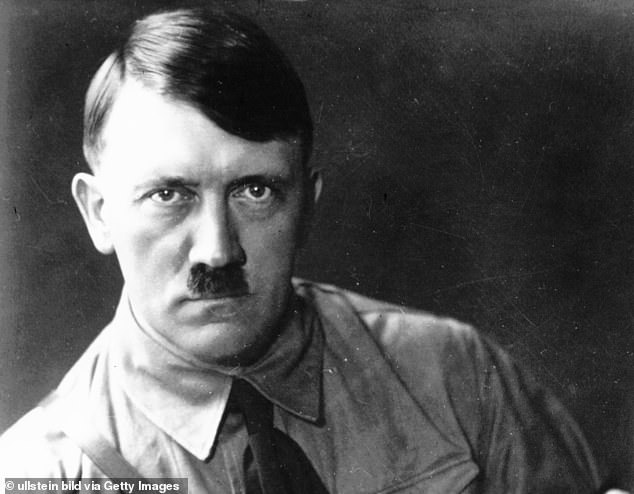 Hitler pictured with his recognisable mustache, which had been removed from this image by the person who played the prank on the shopping centre

Ildar said: ‘Our team was mostly focused on the description of the feat, so our social media marketing specialists somehow did not notice the bad joke and proceeded with the story.’

He added that the marketing specialist who allowed the Hitler post to be published had been reprimanded but it is unclear if they were removed from their position.

The post has been removed from social media and the police are currently searching for the person responsible.

Russian hero Vladimir joined the Soviet army in 1942 and died in 1945 during the Vistula-Oder Offensive, a Red Army operation on the Eastern Front in January 1945.

Countries around the world are celebrating VE Day today, albeit in a more reserved way during the global coroanvirus pandemic, with May 8 2020 marking 75 years since Nazi Germany surrendered, bringing the Second World War to an end in Europe. 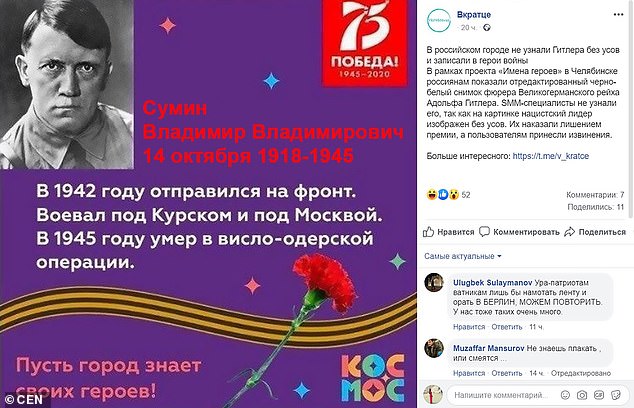 When the image was posted on the shopping centre’s ‘wall of fame’ on Facebook, followers reacted in shock, quickly pointing out who the picture was really of